Inspired by an anonymous possum is not normally how I would start a blog post,  but the incongruous “EdTech Possum” tweeted sometime in July about Twitter and specifically Tweetchats. 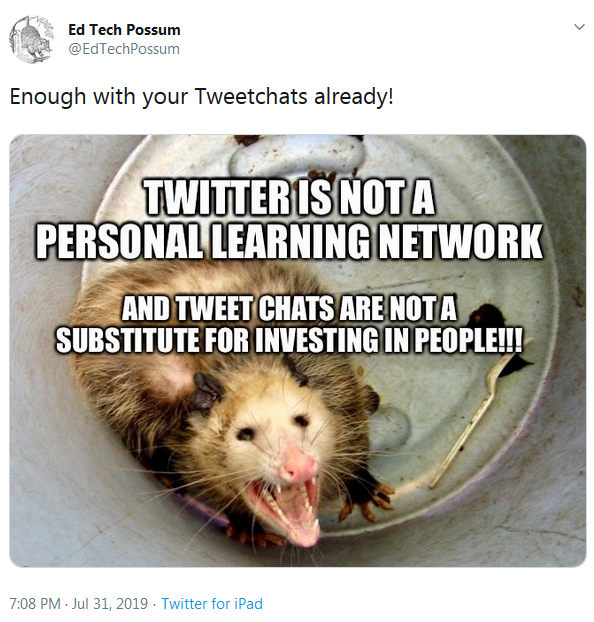 Well the first statement “Twitter is not a Personal Learning Network” is contextual, clearly for this particular marsupial, no it probably isn’t. But it is for some. I’m not going to argue the point.

The second of their statements, “And Tweetchats are not a substitute for investing in people!!!”, got me thinking a little deeper around Tweetchats. So I created a quick Google survey and went to Twitter and a couple of mailing lists.

At the outset I want to say that I am not going to be naming any individuals, and it is also not my intention to level criticism at any particular Tweetchat or organisers. Also the survey data I cite here was deleted upon publication and won’t be used for book chapters or journals etc. as that was not the stated purpose, and additionally I don’t believe the method is rigorous enough – this is just a quick capture and is limited by the sample size and the nature of the collection.

The short survey was completed by 147 people. And as shown below 103 people worked in colleges or universities, 17 consultants, 15 working in agencies or companies providing sector services, 3 were retired and there were 10 “others”. 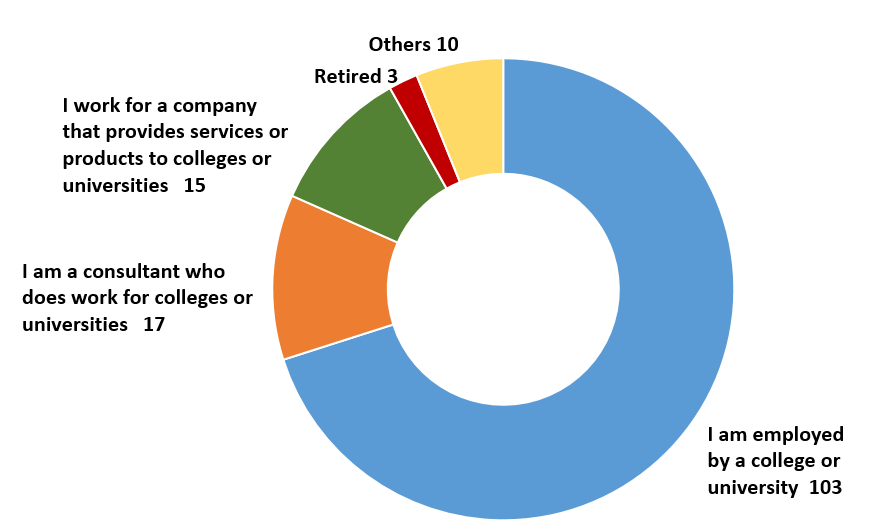 Who participates in Tweetchats?

What chats were people participating in? As you can see from the chart, the most popular was #LTHEChat (91), #SocMedHE (37), #CoachingHE (35) and #LibChat (5), there were also 10 other chats mentioned once. Obviously some people were participating in multiple tweet chats. 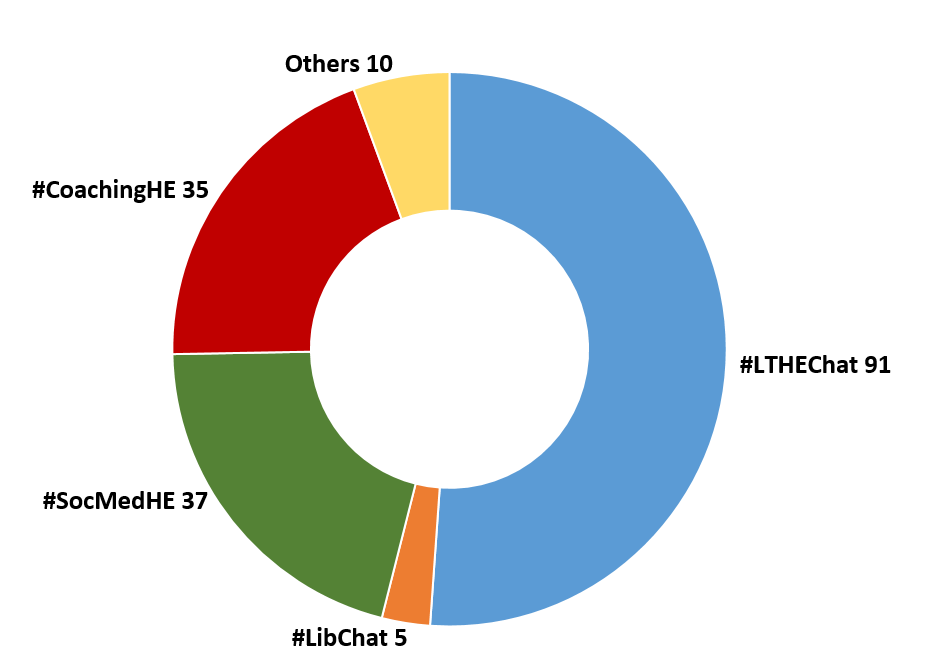 Which Tweetcahts do people participate in?

In addition to posting the survey on Twitter I also posted it to the ALT Members Jiscmail list and the SEDA mailing list (and I’ll leave someone else to discuss the responses on there!). As I posted on the Jiscmail lists I thought to myself – this is where we used to have tweetchats before twitter. And that led me to thinking about whether mailing list traffic as decreased since social media became increased in popularity. So, with thanks to Lisa Vincent, who manages Jiscmail as a service, here’s a small snippet of traffic data in terms of number of messages posted to those mailing lists over 2013 – 2018 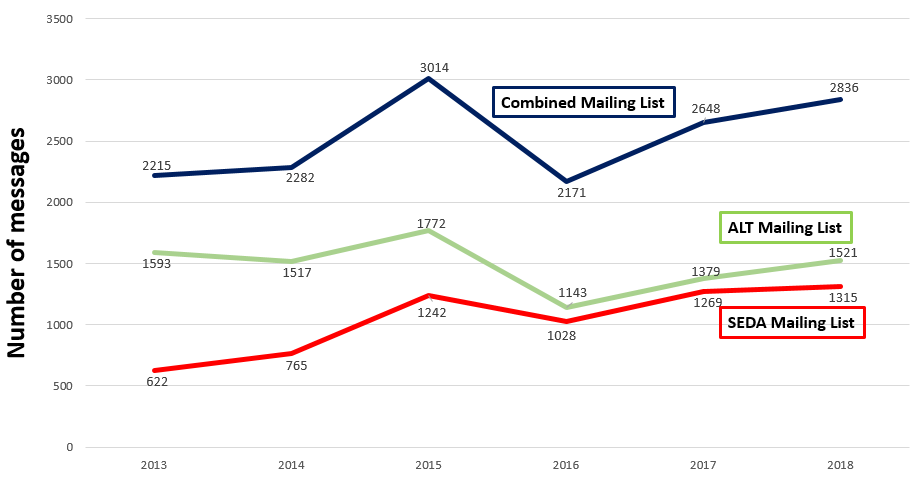 The membership has remained fairly consistent, and the trend on the SEDA mailing list is slightly up, and I would argue that apart from a spike and a dip, the ALT list is reasonably level. I don’t know what to make of the data, but I was assuming the messaging would go down because of the increased use of social media. A question for another day (or someone else).

This is always a good discussion point – but I’ll start off by saying lurking as a term is not great, but as a behaviour online I think it is a valid way of engaging. So how are these 147 people behaving in the tweetchats?

I asked: Do you sometimes “lurk” in Tweetchats? i.e read the tweets but do not directly post to the hashtag? 15% say they always have something to say, sorry I mean they never lurk, always engage. 64% Sometimes lurk, and 21% almost always just read the chat.

Do you lurk in tweetchats?

I asked: Do you see it as part of your professional Development? Most people say yes! 82%. 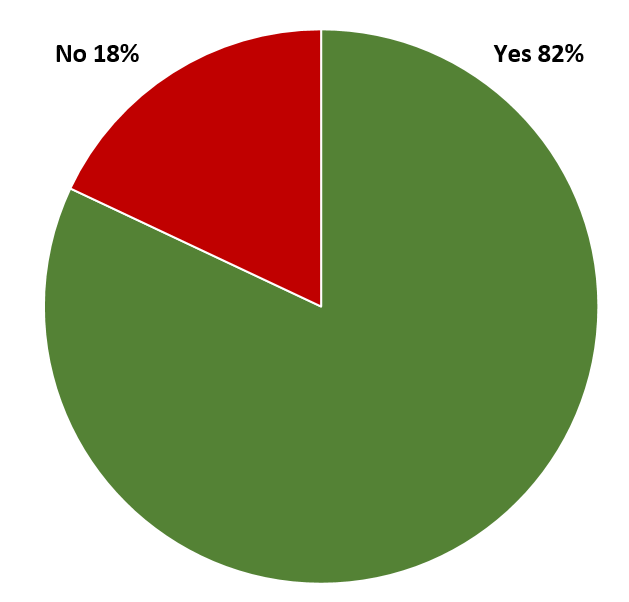 So what about the time you invest?

A key thing I was interested in, and inspired by the possum’s tweet, was the timing of Tweetchats and how people perceived them. My own organisation has run Tweetchats, usually around lunchtime on a working day, and I noticed that the Staff Development Forum run a #CoachingHE Tweetchat scheduled in the same way. But others are scheduled out of business hours, local to the assumed core participants of the Tweetchat.The most popular cited Tweetchat in the survey was #LTHEChat, and the participants were, where I could identify them, mostly UK based. That Tweetchat runs on Wednesdays 8pm until 9pm.

I asked: Do you take the time “back”? (e.g. if you participate outside of working hours do you try and take some time off in lieu of participation) 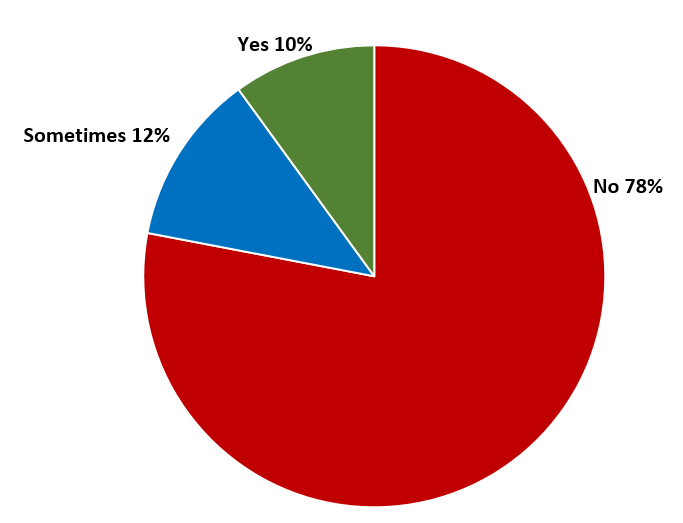 Do you take the time “back”? (e.g. if you participate outside of working hours)

Because I had the data in a spreadsheet, I can say that of the “Sometimes” and “yes” categories (33 people) 5 classed themselves as consultants, 14 worked in companies selling services, the others were employed by colleges or universities. Also of those 33 people, 21 participated in #LTHEchat and 4 in #CoachingHE. In addition, of the 19 people in companies, or consultants who make up the “taking the time back” portion of the chart 7 of them do not see participation as Professional Development.

I have a variety of questions, but given that 82% of the people who answered the survey see tweetchats as a part of their professional development, I’m especially interested in:

I also asked what people liked about tweetchats? Mostly the responses centred around ideas, feedback and opportunity to learn. I asked what they didn’t like and responses were a lot fewer (it was optional). The main dislike was people not feeling they had a way in, people wanted a way of breaking the ice, or being introduced.

Finally I asked – “As well as the professional development aspect, are there any other benefits that you see by participating?” there were 67 replies to this question 51 of them mentioned directly, or by inference through similar terms “networking”. And I have to ask, in a sector like education where we are more connected than ever before because of the affordances of digital, why do we not think networking is part of our professional development?

28 thoughts on “Inspired by a Possum”