Last week I wrote a short story “Next Gen DLEs and Coach C on 15:11 from Cheltenham”. It recounted my struggles with the Crosscountry Trains on-board booking system, and  documented a series of failures and usability errors, both online and face-to-face.

When I tweeted it, and cc’d @crosscountryUK for comment – they did kindly get back to me. In the dialogue I asked – “It would be great if your designers wanted to write a response and talk about the research that led to the system?”

I started thinking about that statement. The system they were using was designed and implemented five years ago. That was the year of the London Olympics, Facebook going public, and the Launch of Windows 8 and the Microsoft Surface. (My Surface is in my desk drawer and has been for a while). I could list a host of apps, sites and technologies that have launched since then, including SMS (the basis of the onboard booking system) being integrated into social media (such as Facebook Messenger) and HTML5 being adopted.

For additional context, I checked the  customer service page https://www.crosscountrytrains.co.uk/customer-service/contact-us and it returns a lot of html errors and has several major accessibility problems.

My point here is not to criticise Crosscountry Trains (at least not on this issue – we can talk about the state of train toilets, customer service and punctuality in other forums). Let’s think about that response they gave me.

It’s a system which is five years old now, not too sure if they’re still around. Sent the article as food for thought however. ^PF

… not too sure if they are still around…

Back in the 1990’s I worked at a university developing material for use on line. One piece of “software” I worked on with a colleague (Mike Sanders) was called Field-Sim, a simulation looking at the geology of the Maltese Islands, developed in Asymetrix Toolbook. In 2000 I left the university, in 2001 so did Mike . Last year the lecturer we developed it for emailed me:

We had this enquiry can you help?

We have been using your excellent Malta FieldSim CAL-programme for many years now for our L-5 students who go on our annual Malta field trip, but as we have just upgraded to 32-bit computing systems , this old 16-bit programme will no longer run !

Have you made an upgrade to this programme – or is there a fiendish ‘patch’ or ‘bridge’ that will enable us to continue running this old programme on the new systems ? 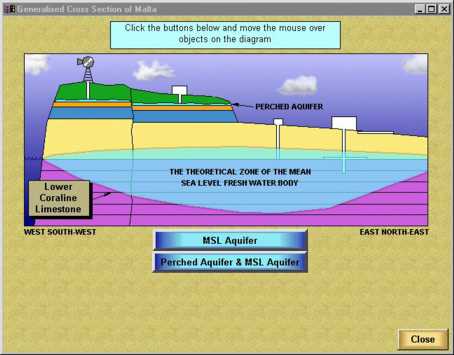 The programme was at least 16 years old at the time of the enquiry. It was developed to support a set course at my university, but made freely available. And now we have a situation where the programme won’t run, and no one left who can fix it.

I can’t help wondering if this is the same situation as Crosscountry trains find themselves. A system developed 5 years ago, that was fine for the time, but now needs updating. But the developers have gone.

My colleagues in institutions will not be surprised by these stories. How many things are in use, done a certain way, a process or piece of software, and we just accept it?  A new person joins and says why are we still doing that, or why aren’t we using xx software? Sometimes the question means that a change will happen, but how often is the answer “we’ve always done it that way” and no change in sight. Was there a developer 10 years ago that built a thing to do a thing for reasons known only to the staff employed at the time, and now we do it because we’ve always done it?

I am not advocating change in every situation. But we need to brave enough to question the status quo, reflect on practice, and experiment to find better ways of doing things. That curiosity needs to be one of the skills we have and use, especially with more and more digital becoming part of our practice.

The tool that was written for a field course in the 90’s could be easily done online with simple authoring tools now, and be more flexible and interactive. I can’t help wondering if the developers who designed the Crosscountry seat reservation system occasionally board those trains and think “if I was doing it now I’d have built an app to select a seat”.

4 thoughts on “Of fiendish patches, and absent developers. An update to the previous post.”