It’s been a bit of a week hasn’t it? And I am not really sure if this is week one!

Three weeks ago I think some people were wondering if there would be an impact, two weeks ago, after having run one of the workshops that she’d come to the UK for, Donna Lanclos arrived at our house to see what comes next; seven days ago Heather and I woke, sat down with tea and coffee and listened to Donna talk through her options and realise that she would not get to do any of the rest of work she was going to do and that if she didn’t get a flight the following day she would be diverted to one of the few US airports that was still taking flights from Europe, and possibly be at increased risk for catching the virus. So we packed her up and got her to one of the last direct flights to her home.

It’s a small story in time of great and terrible stories, and I am hoping that people are reflecting and making notes. I aim to do this on a regular basis here. Small reflections, notes about what I have seen and whom I have spoken to.

So this is at the end of week one, and I have been struck by the amount of discussion around  distance in my timeline, and some of the dissonance in it. The former is an easy one to talk about – perhaps the misnomer “social distancing” being the prompt. It seems that “social distancing” has led to more confusion than was needed. What we mean by the phrase is keep your distance, 2 metres (about the length of a Tapir in one internet “meme“). Basically avoid coming into physical contact with others. I was wondering if some idiot in the Government’s Nudge unit came up with it, someone with little understanding about how social behaviours have changed over the last 20 years. As many commentators have said before, we are more connected now than ever before. This week we have had notes through our door from neighbours up and down the street, all wishing each other well, and leaving phone numbers. Even without the internet it is good to remember that people still know how to be social (at distance!) 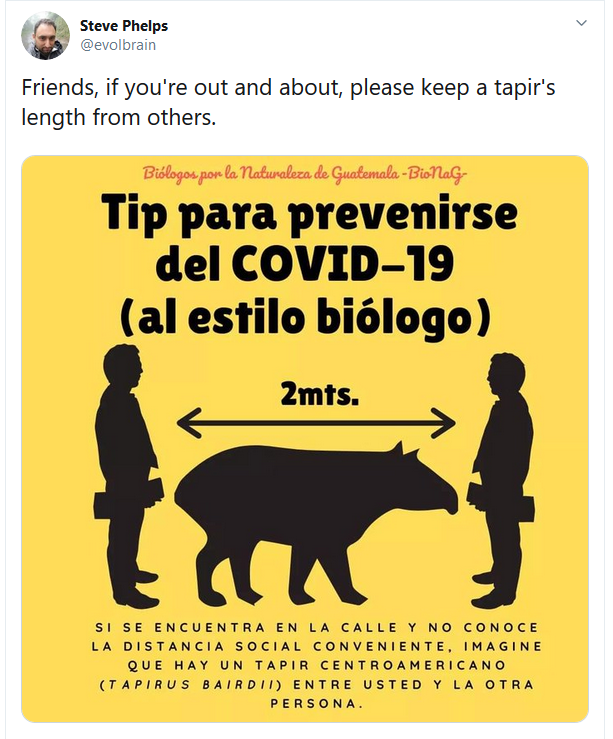 On the internet,  I have noticed a huge amount of people, exemplified by commentators like Deb Kelsey, Sally Brown and Sue Becks who have been amplifying those messages about how to be social and how to support people, Sue’s latest RT is a toolkit designed by students on how to cope with learning in this time. They exemplify the people in my timeline who are trying to find ways through this in a human way, a way that is centering practices and “right now” problems.

So where is the dissonance? I am struck by the number of people in the EdTech world who are “excited” by Covid19. The number of people who have gone into “smug mode”, the “I told you so’s”. I wrote about this last week, and I thought, I hoped, it might have been a blip, as people adjusted.

Last week we saw tweets about “what a buzz it was to be in EdTech” at this time. I understand that people are excited, that people are centering their work, I understand that recognition is something that for years you may have had little of. But people will also remember that you are an asshole too. This is a time for getting on with it, quiet dignity, responsiveness and care. You’re not actually helping people if all the time you are doing so, you are telling them how much you are helping them, or that if they’d have listened to you earlier they’d be better off.

Anyone who thinks that the edtech learning genie is out of the bottle and that there is now a digital paradigm shift created by COVID-19 is probably wrong. And if you don’t believe me, ask any woman who is still fighting for equal pay and status in our society. Those same women who did the “jobs of men” in the world wars, but were told to go back to the home as soon as the wars ended – “back to normal” as Lanclos put it.

Keep connecting, look after those around you, stay safe.

8 thoughts on “Reflections Week One: distance and dissonance”