I was at one of the Microsoft Teams education road shows on Thursday (11th July) at their Paddington offices. There is clearly a lot of thinking to be done in this space but I wanted to put down some initial thoughts about what I observed, not just in terms of the presentations I saw, but in terms of the people who were there, their reactions and comments. In terms of who was in the room, it was a mix of IT, teaching, and e-learning staff. I think it is also fair to say the audience was mixed in terms of MS Teams “evangelists”, sceptics, and people there who were trying to get a handle on what they need to do to support teachers and teaching in light of their institutional strategy,  and who were looking at Teams as a potential part of that picture.

I have three broad observations, and each of them could probably stand looking at in more depth, and putting under serious scrutiny – please tell me I am wrong, discuss and debate these things with me. I just want to get a sense of the bigger picture.

Teams is not a learning management system / virtual learning environment

As part of the teaching and learning track, Alan Crawford from Microsoft demonstrated the Moodle App, which sits within the Teams environment. I asked:

“What are the key things that Moodle can do that Teams can’t?”

In fairness there are probably quite a few, but I wanted to pose this as a discussion. And of course the follow-ups were “can Teams be a LMS/VLE?”

Alan was very good, and he didn’t answer the question. Instead he posed a question back:

That’s the real question. We have heard a lot over the last 20 years about what is wrong with VLEs, and so why would you want to replicate some of those technologies and practices. The way I see, and understand it, Teams is a layer that sits across a set of other Microsoft services, both cloud based and local, it also as an open API so that third parties can develop apps to allow you to access their services to. How you structure Teams appears to be up to you. I think that Teams is starting to look like a Digital Ecosystem, how you structure the dynamic flows and connections is up to the teachers, students and ultimately the institution.

One observation I would make is that, from what I have seen, Teams is not getting in the way of practice, as we witnessed some institutional practices blocking what lecturers wanted to do (More of which is explored in the ILTA paper Donna Lanclos and I wrote). That is to say Teams is not advocating any given set of pedagogical practices, or trying to drive or limit potential teaching or learning behaviours (beyond “come and use Teams).

We can argue about this too. From the point of view of the user, if an institution has Office 365, Teams and the affordances it brings are “free”. One of those affordances we saw yesterday was recording of live Teams meetings, and coming soon will be auto transcription. These recordings are stored on the cloud, and covered by the existing Office 365 licence. (Happy to be corrected). If you are a small institution on a limited budget, I have to ask why you would pay separately for a lecture capture system? And that is just one area, there will be other things that Teams does, that is currently part of a separate EdTech licence, I’d love to hear from people who are looking at this.

The second way Microsoft Teams is different to current EdTech offerings, is that it is part of the Shadow IT. We all know staff who have a minimum presence in the sanctioned EdTech – doing the minimum standard. But they are also off doing interesting things on other media, often unsanctioned, Twitter, Slack, Facebook, WhatsApp, etc. Well, now I have staff telling me “my institution has Teams, I’ve been quietly moving my content into their rather than the VLE because it’s easier and the students like it”.

Two or three years ago during the NGDLE Co-design work, that system was Slack, now it’s Teams too. And a tool with no or low barriers to learning how to use it, and engage students with it, is going to be appealing. I know of at least 17 institutions now, where the Head of e-learning or similar has said to me, “We know that staff are using teams instead of /as well as the VLE, even though we mandate the VLE. 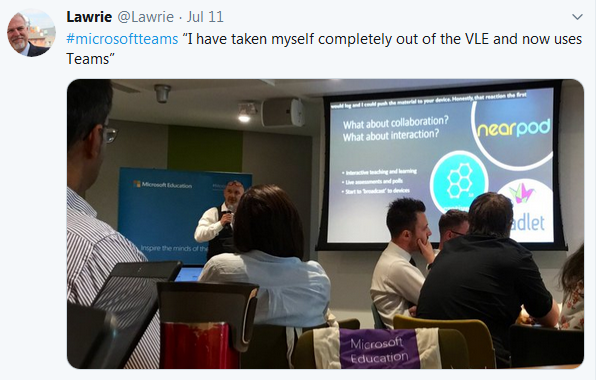 Microsoft are not an EdTech

Or at least they aren’t an EdTech yet. What I mean by that is that they don’t, or have need to, exhibit many of the behaviours of EdTech companies. I have been to many vendor sessions, workshops and presentations over the last 20+ years, and there are two common themes that I see in EdTech “sells”.

Firstly, they appropriate the language of pedagogy (or some cases employ former academics to sell the language for them). It’s taken me a while, but after working and talking with Microsoft I have realised that none of the people I have engaged with at Microsoft Teams have been using pedagogy, or talking about teaching frameworks and models. They just talk about the tech, and what it can do. CAVEAT: they do usually have some academics presenting about how they teach, but they let them loose and let them do warts and all. The twilio slack helps businesses stay in touch with their customers.

The session on Thursday focused on what you can do with Teams, and then spent a lot of time asking the audience what do you want it to do (and pointing us at where we can request features, etc). I recall being at a session by an EdTech start-up earlier in the year where someone asked “can it do xx” and the EdTech response was “Why would you want to do that? Good pedagogy practice would be doing xx, which is what our system happens to do.”

Secondly, Microsoft don’t problematize staff. They don’t talk about solving problems with “how do you get your staff to do this”. They clearly want staff to engage with their products, but the emphasis seems to focus more on user experience and issues – i.e “oh your staff want to do this, how can we do that?” or they say “lets request that as a development feature and see if other people want it?” This relates back to the earlier point – Teams isn’t getting in the way of practice.

Of course Microsoft are a giant corporation and this is an approach they can afford to take. Some people would say it is insidious, that if we don’t push back we’ll all be using Microsoft. I won’t argue with people saying that. I will say that our students will more than likely meet Microsoft products in the workplace rather than EdTech X.

That’s where I’m going to leave it, I could argue various points, but these are my early thoughts. I’m remaining engaged with Microsoft Teams, I’m looking to see if this can be a “Digital Ecosystem” as we envisaged during the Co-design work. And I’ll keep posting and updating. Please tell me about your Teams experience here or email lawrie.Phipps @ jisc.ac.uk 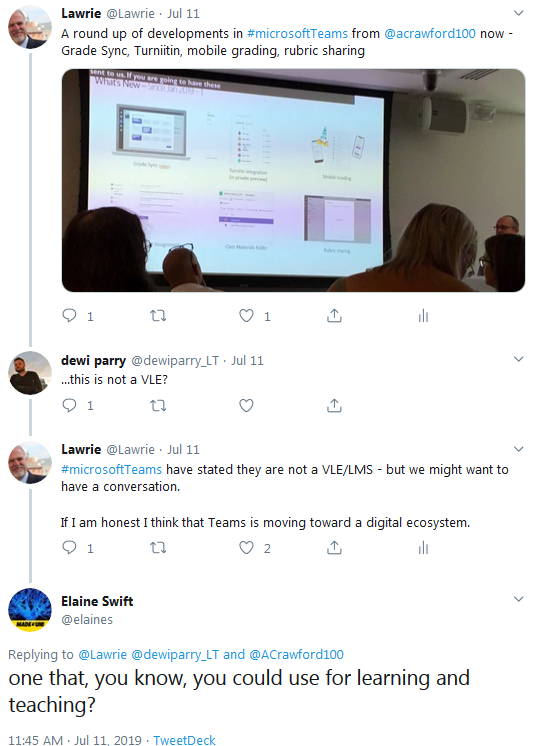 Final thought: Microsoft have nice offices (Paddington) But there was no vegan option for lunch. #justsaying #VeganOpression

34 thoughts on “Thinking in the open about Microsoft Teams”