It’s been over a month of events and workshops.

I’m trying to reflect on all of the things that have happened; delivering a course in Manchester the morning after the tragic event of 22nd May, talking about Rhubarb as a metaphor for digital strategy in Southampton and about Digital Leadership in an age of supercomplexity (not my term) with my colleague and friend Donna Lanclos in Sligo. Finally last week, I attended University of Gloucester’s Festival of Learning where Donna keynoted and later in the week I delivered a workshop trying to make sense of the future of the VLE.

I am tired. I am sat writing this first draft after spending a day making a cobb oven from clay, mud and straw, at the Centre for Alternative Technology in Powys. 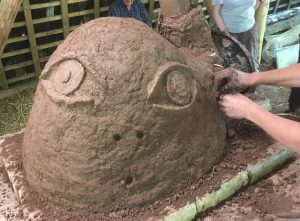 There is a common thread, I am trying to find it, it might just be that I was in these places, and that as a result of events and the places and things that I am doing I am more reflective. Or there might actually be, you know, a thread.

I’ve already written about Manchester and Southampton, and rhubarb. This arc of the story starts with Sligo. For anyone who hasn’t been to Sligo, you should, it is a fine place with fine people, and a fine institute – IT Sligo (best institutional Vegan food of the year – so far). I could talk about the paper that we gave, “Leading with digital in an age of supercomplexity” – but we are writing that up for elsewhere. The only thing I would say is that when you’re presenting with someone, and they are video conferencing in, it is extremely difficult to remain upbeat when delegates keep expressing their disappointment that your co-presenter is not actually in the room, but they might stay and listen anyway.

No, Sligo was the start of the story Arc because I sat in a keynote and heard all about competency based education, and how it was important to acquire skills as soon as you can and “complete” your education so you can get a job and start earning. I sat quietly, an invited guest at the conference, I gave a paper, but I was still a guest. But inside I was very uncomfortable, I was upset and I could not articulate it. And as I sat and I watched the faces of those around me, I wondered if others felt the same. This was the employability agenda at its worst. I have excellent colleagues who speak eloquently about employability, they speak of skills to participate in society, they speak of skills to continue to learn, and of skills to recognise and adapt to opportunities in their chosen careers and other paths.

But this competency based education seemed to focus on ‘learn the requisite skill’, the minimum for a credential, and move on. I was uncomfortable.

I saw this image walking out of Sligo, to the station.

Education is not the filling of a pail, but rather the lighting of a fire.

The sentiment remains no matter the provenance of the quote.

Donna Lanclos came to stay later in the week, she was bearing gifts, gin for my wife and I got Tressie McMillan Cottom’s book – Lower Ed. I have been looking forward to reading it, it feels part biography part political campaign, and all education.

Arriving at the Festival of Learning in Gloucester, I had already read part of Tressie’s book, and knew it would feature in the keynote Donna was giving.

Education, Employability, and Citizenship:  What is at Stake?

In the first half of the keynote Donna told the story of how the design of spaces can impact on learning, using the active learning spaces used at UNC Charlotte. She talked about how the design challenged lecturers, and students to think differently about learning and teaching. How even when presented with ‘traditional’ learning spaces the lecturers continued with the active practices they had established in the other spaces. And of the coming together of the beginnings of a community engaged in those practices.

This was a good story about educational change, a story about good returns for both student and staff. Then she switched, up to this point she had been reporting on a small scale innovation (although a big estate investment in the classrooms), she highlighted the nature of innovation that was lacking at institutional scale, and put a slide up that just said: 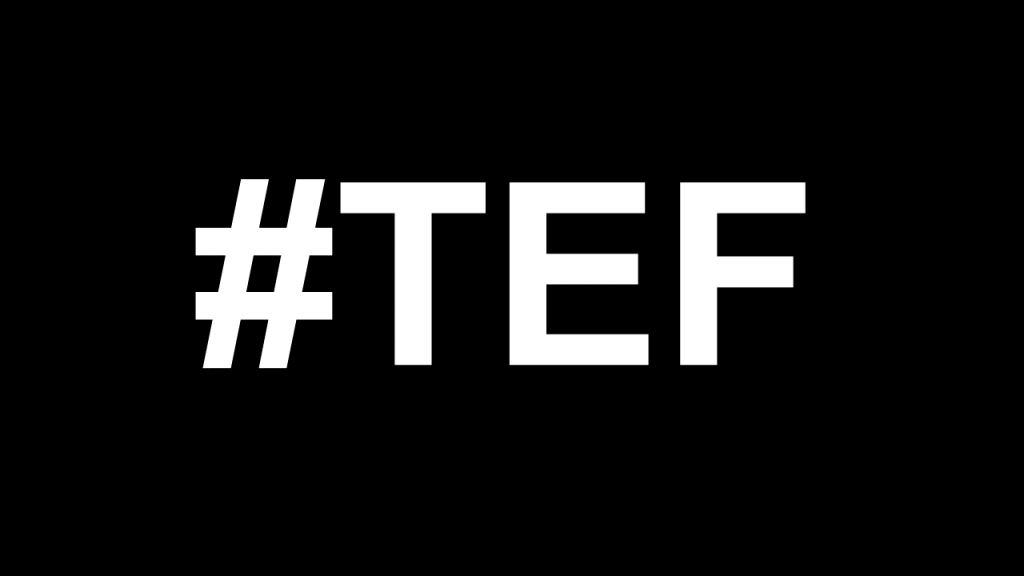 She talked about how teaching can be homogenized across Quality Assurance frameworks without talking about diversifying access to education, expanding the ranges of effective practice, or about processes of education and the complex ways that can prepare our students to be citizens. She challenged the audience, pointing out that checkboxes and metrics reduce teaching and learning to commodities that we sell our students.

Whilst a fees system is still relatively new in the UK, the US is an old hand at it, and not just fees but “for profit”. Donna referenced Tressie’s work in “Lower Ed” , where Tressie calls out the logical progression of “employability”, making the point that Lower Ed is a state of mind, not just a kind of institution. 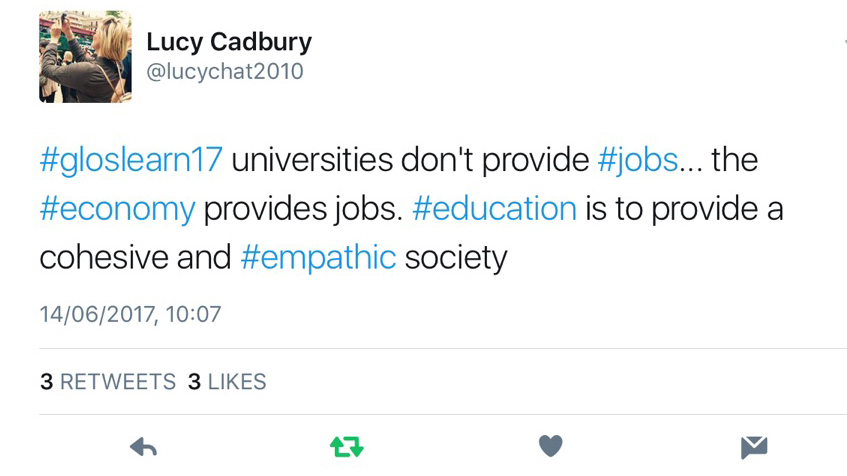 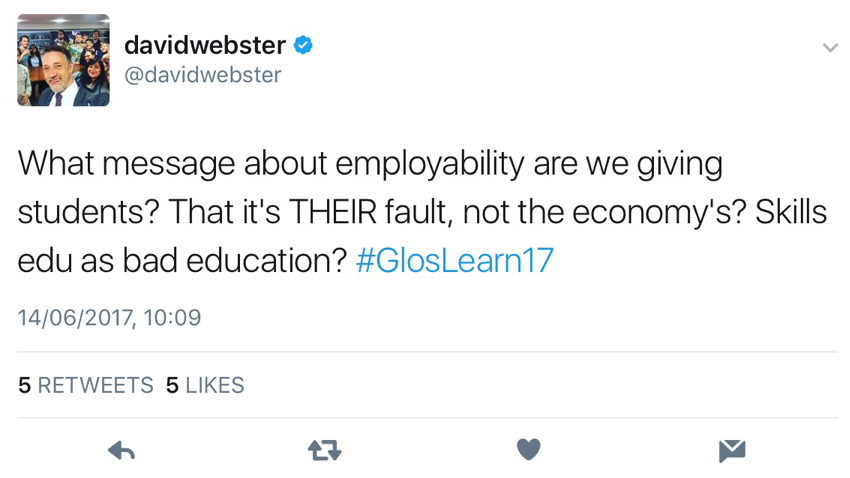 I left school at 16, with no qualifications, in 1982. Thatcher had devastated the industry of the midlands and was about to destroy the coal and steel industry. As I read the book it struck me that the process of employers shifting responsibility for their workers had its routes back then (if not before). With massive unemployment, cue UB40 1 in 10, my only option was a Youth Opportunity Scheme, YOP. I started in May 82 working in a foundry pouring castings and any general dogs body jobs that were required of me. I still have some scars from the hot metal. The “promise” was a chance for a job with prospects, part funded by the state to provide us with training and skills, where at the end of 6 months there was a good chance of a job. At 5 months the cohort that started with me were all told that sadly there was no job available. The following week I joined the military and not long after I was standing on a beach 8000 miles away. The firm I worked for, RMI Steel (now long gone), got rid of the others in my cohort at 6 months, and started another group. 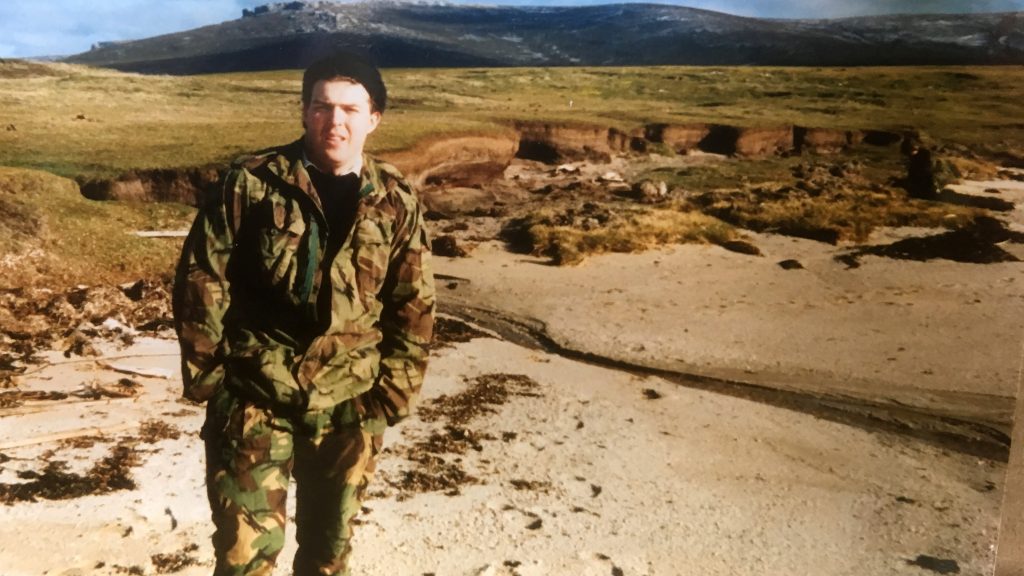 Standing on a beach 8000 miles from the Black Country

Education should be a collective social good, Tressie argues we have lost that thread, in making it an individual good. I twitch when I see companies telling universities that they need to “train” graduates. I aspired to education, eventually through engaging with the Open University, and then a chance visit to Plymouth University, where I eventually got a degree in Environmental Science. I was inspired to learn, not to be trained. This shift in education into “training” feels wrong, it feels like another form of the YOP scheme.

I began this post telling you that this weekend I built a cobb oven. A group of us had come to on the course to learn a skill. Everyone on that course that I spoke to had the privilege of education, an education that made them curious and gave them the ability to continue to learn. One couple on the course came to learn how to build the oven so they could build it for their local community garden. We had an education that had enriched our lives to the point where we wanted to experience this, not just exist. Our education (and most of us were not young) had not been focused on trading competencies, skills and training for jobs, we had been privileged to participate in an education that, perhaps, was more focused on the social good and community.

The Centre for Alternative Technology is very much focused on community and education. It was good to be around those people and in that place. It reminded me that I would like institutions to be like this; learning communities.

*Endnote: yes, I know he probably didn’t say it, and even though I make reference to that here, I am sure that someone will Yeats’splain anyway. 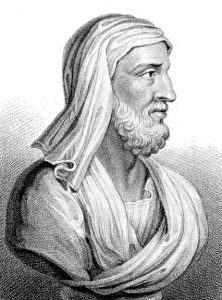 The mind is not a vessel to be filled, but a fire to be kindled.

17 thoughts on “Education is not the filling of a pail, but rather the lighting of a fire.*”