Digital is people – it’s not the first time this has been said on this blog, and I am sure it won’t be the last. 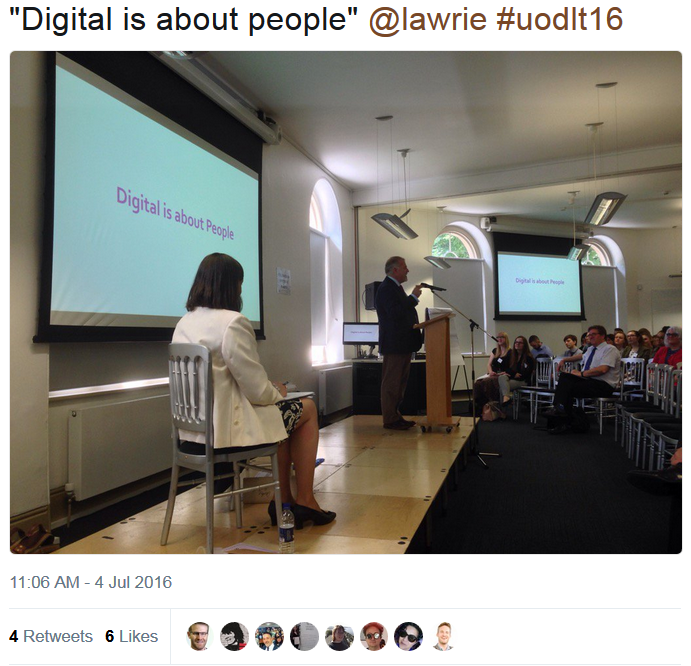 One of the unique things about people, according to Chomsky, is our ability to communicate through language. Institutions are made up of people and there is a now a huge diversity of spaces where conversations are happening. When it comes to learning and teaching, students and staff, it is becoming less useful to think about learning spaces as being informal and formal (an artificial delineation as students might consider any space that contains a member of staff to be formal), students do not think “ah, this is a less formal learning situation, than the one I was in earlier!” At the same time it is also inappropriate to think that learning spaces (especially digital) can be categorised. There are many examples of students and staff setting up social media spaces, and of tutors using tools such as slack and skype in their teaching practice.

Learning is effective when we are connected, in conversations, in groups. And with the number of spaces that conversations can happen inside and outside of institutional systems, it is unrealistic to try and confine them.

Institutional VLEs provide functions that support learning, for example discussions, posting and sharing content, wikis for groupwork etc. However, the provision and access to such tools are controlled by the institution, and don’t often align easily with day to day practice of either teachers or learners. This may be one of the drivers that is causing the shift away from centrally provided systems and towards a more individualised approach for teaching staff and students.

In June Jisc and Leeds Beckett University hosted a workshop around the Codesign Challenge: Next Generation Digital Learning Environment. The event looked at approaches to working with existing virtual learning environments and third party applications such as the Known platform and Aula to extend their reach, to open up the opportunities for conversations.

At Leeds Beckett University Simon Thomson, Head of Digital Pedagogy, is leading a project to explore how the development of a personal student space can link up with institutional learning spaces. The HEFCE funded research project into Personalised User Learning & Social Environments (PULSE) project is looking to develop a hub for connecting students’ existing spaces with institutional spaces and empowering students to take ownership of their content within and beyond their learning. They are not trying to develop an entirely new learning platform, but focusing on the architecture through which to connect existing spaces.

The Aula team have taken a slightly different  approach. Recognising the trend toward disaggregation, and the possible motivations behind it, they have created a “conversational layer”, that can run alongside an existing VLE and provide an ecosystem for a range of other tools.

In 2009 I co-authored “preparing for the postdigital” the premise for the paper was a simple quote from Douglas Adams:

The paper went on to articulate an approach that avoided the digital and analogue distinction of technology and move the discussion to something more nuanced and less divisive. ‘a human context that focuses on the essence of our work rather than the appearance.’

As the discovery phase of the Next Generation Digital Learning Environments draws to a close and we are collating our ideas and examples of practice I have begun to revisit those initial ideas around postdigital practice. The initial paper tried to frame a person-centred, flexible pedagogy nested within a set of social spaces. Postdigital aimed remove digital dogma, where the language of a perceived digital elite, be  that technorati or edupunks, drives not only development, but also skews innovation to either politicised or the latest technology. As we witness more examples of the breaking down of the VLE, where  teachers are now using whatever tools they need to, to do what they need, and conversations are happening in myriad online spaces both within and outside institutional control, but driven by the user. I am struck by the initial premise of the paper, and the realisation that teachers and students just want stuff that works, for them. Is this emerging trend toward disaggregation an indicator of Postdigital academic practice? The postdigital VLE made real?

When we start to examine the trends around disaggregation for practice purposes, we also need to be mindful of other emerging themes with digital spaces; control, surveillance, “weaponized” metrics such as those used by corporate bodies outside of learning, and of course how the algorithms within spaces use the data to control our feeds.

The report is coming together nicely but if you have use cases you think we should be using, get in touch tell us about your practice, your digital.

21 thoughts on “Institutional to Individual: realising the postdigital VLE?”