These kinds of terms are a useful way for identifying if a talk will be any good or whether it will be full of sound-bytes. But the language is more than that, using it in this way disenfranchises billions of people in the world with no access to technology, either through geography, poverty or disability.

When I set up the Jisc Disability Service, TechDis, I needed a crash course in the language of disability so as not to be able to offend by accident. Talking to people about the issue and in trying to learn as much as I could was very enlightening. My reasons weren’t especially altruistic, I knew that for the service to work I needed the support and endorsement of high profile disabled staff. Some of the people I talked to initially didn’t worry about it, they would say that the language, whilst important, was not as important as the intention to do good. That it was OK if what you said was not said to offend. If it did they would apologise. But one of the key issues about language is the way it labels things and people, we would be aghast if someone today used words like handicapped or cripple.

When we see speakers and commentators using terms such as Touch-Screen Generation we need to remember that mostly they are speaking from a unique world view that is primarily white, male and with high levels of intellectual and social capital generated in the global North. The way we throw these phrases around now is lazy, making assumptions about global perspectives that emerge from the agency and autonomy of a few.

The affordances of technology do not belong to any one generation, and our labelling of them in that way harms any work we are trying to do to enrich education, and wider society. It not only disenfranchises sectors of the global society it also gives some people permission to disengage.

We can all probably recount a tale of some senior staff in a university printing their emails, writing on them and handing them to PAs to type out and reply. Labels, like “Touch-Screen Generation” give permission for people to ignore technology, to carry on being inefficient in their job, and having an impact on others (how many people use Outlook calendars in your organisation?). Academics who look at the new technology and say “yep, that’s what my new students will do, but I don’t have to.” will become an anachronism, but only if we pay attention, if we not only extol the use of technology but also use language that is accurate and inclusive.

With thanks to Richard Hall. 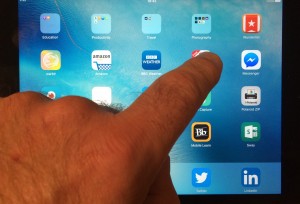