Last week Donna Lanclos and I had our session accepted to ALT-C. It builds on a debate around whether Learning Technologies are fit for purpose?

We know this is not a new debate: 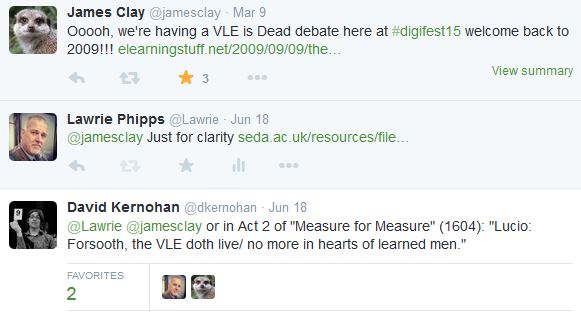 Previous debates around this subject have been focused on the ‘purpose’ of the Virtual Learning Environment. As argued by Stiles 2007:

I would argue that, in the future, corporately initiated or owned processes will be best dealt with by interoperating ‘suits our needs best’ systems, and increasingly, student initiated processes will be one on the web using their choice of tool and services. Connecting these will be the major task.

The prime role of the VLE is likely to be in articulating the intended learning experience and, to some extent, managing it.

Or Phipps, Cormier and Stiles, 2008 arguing around the rise of web based tools and changing online behaviours:

In the last three to five years there has been a marked increase in the number of technologies that have been developed and deployed that allow us to interact online in ever-easier ways. Blogs, wikis, photo and video sharing sites, podcasts and a range of others have become more readily available.

Alongside these developments have come changes to the way we behave online; it is now relatively simple to collaborate, share and publish, either to a wide audience or to ‘trusted’ colleagues.

Our session is not the “is the VLE dead?” debate.  We wish to explore how we can critically reflect on “Why are we using the systems?”

A carpenter building a cabinet will choose a set of tools most suited to the job but also suited to their own preferences, and how they prefer to work the wood into the finished product. We don’t hand a craftsman a generic set of tools and expect the same. Education is an expertise. It is time to ask ourselves are we simply using the tools because they have been bought and paid for?  Is that enough of a justification for them to be used? And do they suit the needs of the staff who are crafting young people’s minds?

The debate in our session will look at a range of issues around the use of technology, but at its centre will be the idea that we need to develop a more critical set of questions to ask ourselves when we are deciding what tools we use in our teaching practices.

One thought on “Reframing the debate? Learning Technologies part 2”