Vulnerability comes from the latin vulnerare, “to wound” and is defined as “exposed to the possibility of being attacked or harmed, either physically or emotionally”

I’ve been discussing vulnerability as a part of authenticity for a while now and thinking about it in my own context, through presentations and workshops, putting more of myself into them as part of that. Digital Pedagogy Lab has allowed me to explore this further, thinking about both my own practice and the role education plays in helping students understand vulnerability within the digital landscape, and some of it is linked to what vulnerability may look like in the curriculum.

There are inherent problems with this experience—can you really have vulnerability in what is generally considered a safe space, the education experience. Further, if you want students to learn from exposure to vulnerability can you plan for it in the curriculum?

When it comes to the curriculum, and I am especially thinking of working in digital spaces, where the walled garden has become if not mostly the norm, then at least the default, we protect students from outside influences, even from their peers on different courses. I would also argue that planning for risk and vulnerability, as some authors have,  is problematic in that once you have a plan for any of those things, then you actually negate the very elements you want to expose as part of the learning. The whole point of risk analysis, for example, is minimise risk and identify mitigating actions, if it not remove the risk fully.

If you try to plan, to design risk and vulnerability into the curriculum, then it will lose authenticity – students will know.

And furthermore, if you add contexts where students experience genuine vulnerability, genuine risks with real consequences, then a second vulnerability occurs, to you and your organisation. If you add genuine vulnerability there is a risk that some students, students who are paying fees, who are completing course evaluations and national student surveys may not like it. And if these are key performance indicators (KPIs) for you or your institution then there may be consequences that senior managers would not want. This is a similar problem that teachers who take risks with innovations in their teaching face.

So is there a solution to the the Vulnerability – Innovation – Risk paradox?

Let’s go back to the start of this conversation; vulnerability as a part of authenticity in my own context. In my role I have the opportunity to blog, tweet, run workshops and deliver presentations, I stress the opportunity, it is not a requirement. One of the behaviours we have seen since the begining of the ability to publish in the digital commons is that of “individuals behaving as institutions”. This recognises that ‘digital’ now sits beneath practice, the affordances of digital in this environment rise to the surface and are exploited by individuals. As the individual’s digital artefacts grow, so does their network of collaborators and their audience. And the more this happens, out in the public space, the more we exhibit, or at least have the opportunity to exhibit, our vulnerability.

For me, vulnerability is about stretching my ideas, thinking differently to, or challenging the ideas of my peers; or it may be exposing my past as being influential in my thinking. For example, when I think about learning analytics and especially how some institutions use them in a predictive way, I would point to my background, from a sink estate (in the US you might say “the projects”) and my relative lack of formal secondary education (I left school with no qualifications at 16–I jumped before they pushed–and joined the Royal Navy). Predictive analytics as currently practiced would have kept me out of Higher Ed, and I would never have had a chance to earn my BSc (Hons). These stories, these revelations about our past and our paths, are ways in which we can demonstrate being vulnerable to colleagues, and students. 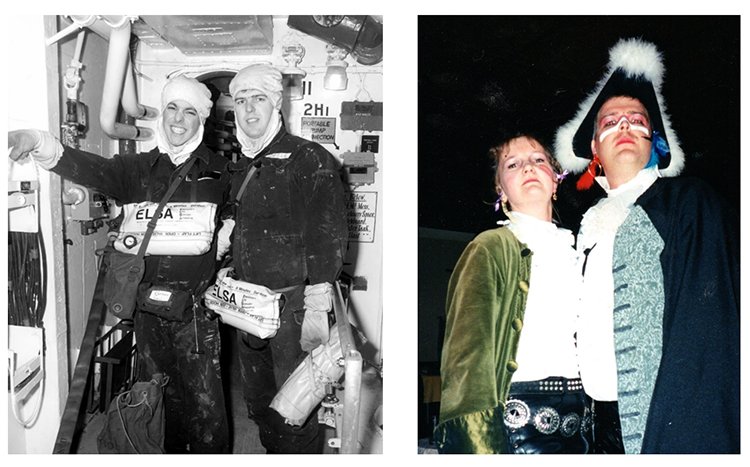 Autumm Caines recently blogged about her own vulnerability in using twitter for the first time, as a student, where her practices were called into question.

The blog post was a rant about the best ways that people were using twitter and how they should not use twitter. Two accounts were highlighted and an example was made out of them – your’s truly was the prime example of how to NOT use twitter.

I remember being pretty mortified, I think I killed my account for awhile, I think I changed my name when I eventually reactivated it. After some time I got a little mad. I mean I was a student. I was new to this online platform and so was everyone else; it had only been around for a little over a year. The whole thing was a big experiment as far as I was concerned. So I tweeted some boring stuff. There are worse things in the world. I ended up tweeting a link to the offending post stating “I guess no one cares about my soup”.

If we model risk-taking for students, if we engage in practices (as Autumn did) without knowing exactly why, or how they will turn out, perhaps we are facilitating them participating in the open spaces, giving them the opportunity to express themselves and expose themselves, being vulnerable.

Audrey Watters writes about “Domain of Ones Own” far more eloquently than I on this subject.

“The initiative represents a kind of open learning — learning on the Web and with the Web, learning that is of the Web — and all along the way, “Domain of One’s Own” offers a resistance to the silos of the traditional learning management system and of traditional academic disciplines.

It highlights the importance of learner agency, learning in public, control over one’s digital identity, and the increasing importance of Web literacies.”

It is what it says on the tin. Give students a domain of their own, let them understand learning in a public space, exposing their ideas in the public space, what it means to take a risk when you publish in this way, exposing them, making them vulnerable.

And the same goes for the data we create, both knowingly as a by-product.

“A Domain of One’s Own asks us to consider the infrastructure. It asks us to understand the Web and our place on it. It asks to us to pay attention to the content we create — as teachers and as students — and to weigh where it best resides — who has access to it, and for how long. It prompts us to ask “what data are we creating” as learners and “who owns it.” Who tracks us. Who profits.”

This is a way we can introduce risk and vulnerability into the curriculum. Negotiated, perhaps even mediated, but it a way of enriching the student’s experience by allowing an element of authenticity into their own practice. And remembering of course to embrace our own vulnerability.

With thanks to Autumm Caines, Donna Lanclos, Jesse Stommel and Audrey Watters

Class of 1944: Vulnerability in the curriculum will always be context specific

6 thoughts on “Vulnerability in the Curriculum: No one cares about your soup!”