It might be the time of year, or it might be that there are some interesting job appearing in the sector, but whatever the reason, my inbox is full of Linkedin requests, and no small amount of requests for the writing of linkedIn recommendations. In addition, I noticed that some institutions and organisations have reverted to asking for CVs rather than filling out job applications. There was also an interesting article by Joshua Kim on inside higher ed, asking if LinkedIn will ever replace the CV.

I remember when I signed up for Linkedin, it was described to me as a “Facebook for work” (sic). I don’t particularly like it, and even though I know people who use it very effectively, I have never deeply engaged with it. But the recent activity got me thinking about what someone’s network tells us as opposed to what traditional CVs and job applications tell us about a person?

At the most basic level a CV or job application gives the following information:

But the important thing about a CV or a résumé is that it is autobiographical, it is you portraying yourself, and it can be as simple as a bunch of facts and dates or it can be a narrative, and the narrative can have as much gloss or spin as the author decides.

I started thinking about this more over the weekend as I was also doing some social media analysis, mostly around Twitter, and mostly around my voluntary work with birds. I started to visualise my own (active) network on Twitter (using socioviz.net). I did it in two ways – first visualising who I am having conversations with; and then the hashtags I was using. August in the education sector is probably not the ideal time to be having that conversation!

The hashtags showed what I cared about – unsurprisingly in my case, and it being August, it pretty much split into four areas:

But who was I having those conversations with? 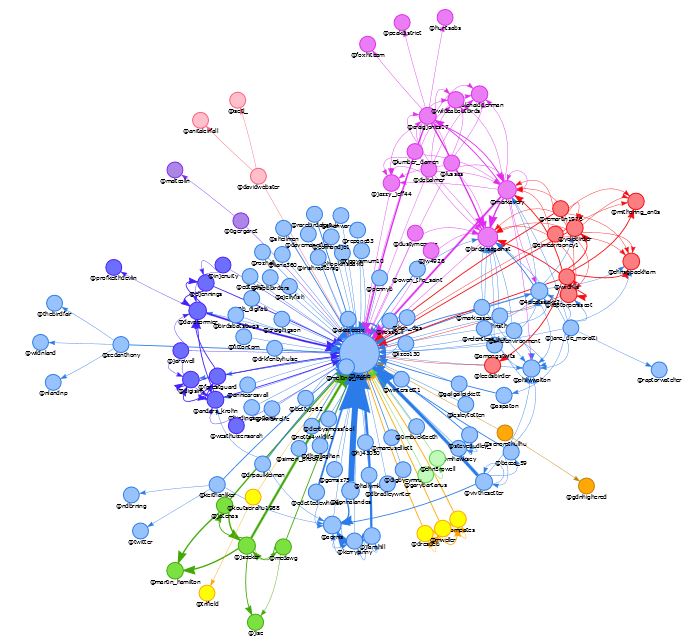 When you look at someone’s Network, and the interactions within it, is it possible to find out questions such as:

And if it is possible to do that, is it of more or less value than their CV or résumé? And how can we assess or evaluate that network? What should we be looking for?

There is no denying that having certain degrees from certain universities looks good on a CV, but does looking at a person’s network reinforce that privilege? Does it reproduce inequality? Or is it a way of moving beyond those structural advantages?

There is also the influence of negative networks. The recent case of Cole White in the US is an example of where being associated with a group of white supremacists resulted in him losing his job (and just so we are clear here, I am glad).

If people hiring him had looked at his network, would they have identified this “character trait” and if so would they even interviewed him? The answer is probably no, but whilst this kind of right-wing network is obviously repugnant, are there networks that will split interviewers. My own network clearly shows, as well as my education and technology interests, that I am very much driven by animal welfare and lean toward the left of politics. None of the networks I participate in are “extremist” or “illegal”, but to some my network will be at odds with their own.

There seem to be more companies and organisations moving toward CVs and résumés and Resume Atelier features rather than applications, certainly at middle and senior management, this may be because of the changing nature of the job market. Is it more challenging to recruit, is this shift away to attract potential recruits and as an initial sifting process? Or might LinkedIn be looking at automating some of that sifting?

In 2016 Microsoft bought LinkedIn for $26 billion dollars, giving them access to the data,  employment records and education records of around 500 million users. It also gives them access to the network dynamics within LinkedIn, who they are connected to, who they interact with. Could Microsoft develop a tool that uses that data to provide an enhanced CV, one that looks at network interactions. They will certainly be looking for ways to get a return on the $26 billion dollars.

With increased visibility through digital, our networks are saying things about us, about what we believe and what we value. The data of those networks is available to be interrogated and used. What does it say?

13 thoughts on “Résumé vs Network: what do they say about you?”