Ten years ago a group of people working in higher education got together and wrote a thought piece about postdigital. Now, Petar Jandrić, who as been exploring these themes for several years as asked the authors to write and reflect on our original paper. I would like to thank him for the opportunity, and my fellow authors who have also engaged in this exercise.

In Preparing for the postdigital, we, the authors, were looking to articulate how technology is not a driver of social change, but an enabler. In original article in 2009 we tried to articulate the subsuming of technology into society so that its presence, and to some extent the continued proliferation and innovation becomes a social and cultural norm.

“Not only is the digital subservient to the social, it is, in some ways (and soon most ways), transparent. We are moving towards a postdigital age where the tools driven by the microprocessor are common to the extent to which they will no longer be noticed.”

At the time i was thinking about digital moving from being novel or innovative to being seen as “the norm”, being seen as just something we do. Therefore, my working definition of “postdigital” was an environment where digital was embedded and invisible.

Since working with colleagues on that “Preparing for the postdigital” paper my focus has been centred on education practices and how some individuals have been enabled to change or modify their own practices to teach or research more effectively. Many of the changes have been positive for those of us privileged enough to work in the education sector. Observing through the lens of social media, for example, individuals being able to instantly access a wide network to test ideas and discuss them. There is a growing group of academics and academic related staff that can be identified and recognised through the online promotion and increased visibility of their work and their participation in network activities. The way they interact and collaborate through social media and connect their various networks on different platforms is also distinctive.

This networked behaviour does feels indicative of a positive postdigital paradigm. In 2015, we re-visited our notions of postdigital, and at that point, I was thinking about digital in terms of people’s relationships with their institutions, and how those connections had become more fluid and agile thanks to the affordances of digital.  So that working definition of post-digital was about networks, and behaviours of individuals within the network, as combinations of their data, the technology and tools they use, and their culture values and behaviours interacted. 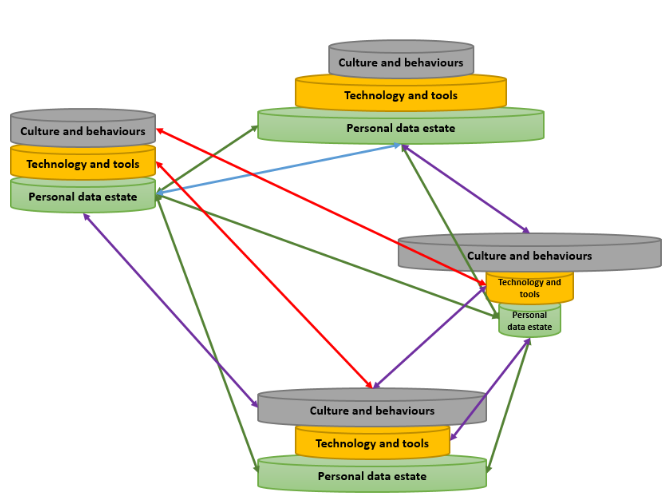 In our recent research, published in ILTA Donna Lanclos and I highlighted issues of trust, risk and innovation within institutional teaching and learning contexts. These three areas are good examples that would fit in the “culture and behaviour” layer in the model above. But these are also prime examples that impact on technology, tools and data layers.

When trying to influence or change something as complex as a digital ecosystem, it is essential that we have an understanding of all of the factors in play. Techno-centrists and Tech evangelists will always talk of the positive impact of introducing a new tool, but little thought is given to negative or long-term impacts. The mantra with implementing technology in silicon valley is fail fast, fail often, and we see this narrative creeping into EdTech, and even see it repeated by senior managers in the education sector (Read Audrey Watters). But there is no evidence to support this approach. And whilst we talk about the long tail of impact of projects that have been built in years past, who is talking about the long tail of failure. Would the sector have been so fast to sign up to a plagiarism service 10 years ago, if they had known all the student IP would one day be the property of a publishing company?

Go to any large organisation and there will be an attitude of “them or they”, that is to say that even in senior managers there is often an unconscious reaction to some changes; we refer to the organisation as if it were conscious. “We need to do x?” Is sometimes initially met with “The institution won’t let us” Or even a department. “We should do y” met with “the faculty of z won’t like it”.  Similarly, we give agency to digital, talking about how it does things, when in fact it’s been built by people to do those things.

This was, to me, an unexpected facet of the postdigital from the way we first envisaged it:  the way we talk about these systems, these tools, these algorithms, as if they are entities with agency, thus absolving those who control them of responsibility. This is dystopian postdigital, where users feel they must use the systems to be able to live their lives, even as they recognise the surveillance (Read Chris Gilliard) and tracking, political bias (read Safiya Noble) and prevalence of bots and trolls.  We walk towards it with (sometimes) resistance and reluctance, but still we move toward it.

The naive utopia we described in our 2009 postdigital paper probably only exists in the minds of idealists and tech evangelists. People have designed digital tools, platforms, and other environments with political and financial motives. In our current postdigital world, digital does not serve the social, but through the manipulation of people, it is driving a particular kind of society, one that exploits the weaknesses and and fears of people; enables the rise of racism and xenophobia, and intensifying inequality.

The postdigital we described in 2009 must not become a reality. Digital must not disappear into use, become invisible. An effective postdigital society must be one where we spend time and energy ensuring that digital is not only seen as present, but also explicitly and critically noticed. For me the postdigital we got is the opposite of what we originally tried to define. Postdigital now must involve monitoring the algorithms, and those people who have the power to manipulate digital to exploit others.

What to read next? Richard Hall’s excellent reflections at “education, technology and the end of the end of history“