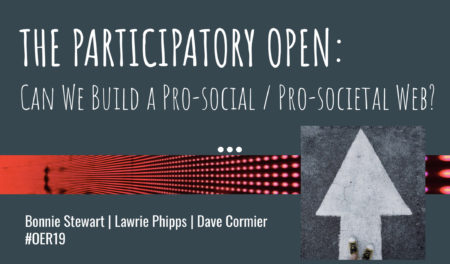 OER19: what I am thinking, and what questions do I have?

Myself, Bonnie Stewart and Dave Cormier are presenting this week at OER19. The Participatory Open: Can We Build a Pro-social / Pro-societal Web? We started talking about this session when I wrote a blog post about the UK Government’s approach to digital. Namely the trend to put their services, and especially those services for the disenfranchised and vulnerable online, to automate processes and decisions where possible.

It is a move from digital-by-default to digital-only.

At the same time there is also a trend to remove the public services that would enable wider access to those “open” services, such as libraries.

Going forward, what characteristics of open are in service to a pro-social / pro-societal web? What are the barriers that are put in place because of open?

Open is in the eye of the beholder, ask a publisher, a teacher, a researcher and a librarian and you’ll get eight different answers. Mostly the Open agenda that I am familiar with comes from a western perspective, where, for example, many assume device ownership is less of a barrier. This Open comes from a place of privilege, global north privilege, white privilege, and mostly white male privilege. Andy Lane wrote about Open and Education in 2009, he looked at if Open could actually widen rather than bridge the education digital divide? Have we addressed those arguments? If Open comes from these places, when we look at the impact of open on wider society, and in building a prosocial web, what changes? And what becomes reified? How do we decolonise Open? (A question being asked by Maha, Taskeen, Cheryl and Tanis. )

So why is the location important in the context of this post (and my own history). Earlier this year I was presenting at a conference in India (at the invitation of the British Council). From the time of colonisation by the British until 1947 the official language of India at federal level was English. But after independence the constitution of India did not adopt a national language. In colleges and universities courses are normally taught in the regional language or English, and many top institutions only do exams in English. The conference was a good conference, but there were moments, in good humour, that my imperial heritage was problematic. 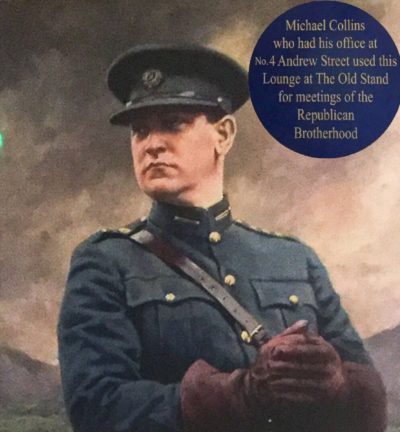 And of course you do not have to go very far from British shores to find that same problematic history. 1922 and the formation of the free state was not that long ago, and as I sat this week in the bar that Michael Collins used for his meetings of the Republican Brotherhood. It is hard not to think about the impact that British Politicians have on both our own home culture, and the cultures of those we have sought to subjugate.

But are the machinations of Westminster factions which constantly impact on our (British) lives, the petty ideologies of all sides of the House of Commons, only our concern? That is part of out “Little Englander” attitude.

As we came through Connolly Station (named for one of the executed patriots during the Easter Rising) this was the sign that greets you. “ARE YOU PREPARED FOR BREXIT” 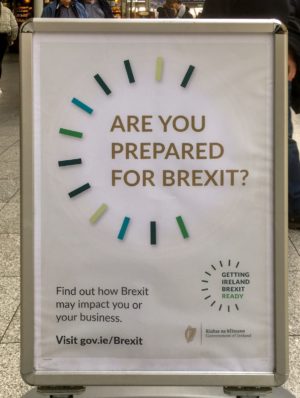 And leaflets explaining the issues too!

Our ideologies reach out and impact on the wider world again. Brexit is impacting a lot more than just the UK. It is not just about “us”. Although, I suspect that the Johnson’s and Rees-Mogg’s of this world seek Brexit so that they can claim to be big fish, albeit in small ponds.

“The Troubles” and how it relates to the the Rising, and the partition into the North and the Republic is visible in all parts of this Island’s culture. Brexit has the potential to open these wounds. And for those of us who were intimately involved with the history of Northern Ireland, that border issue is not an abstract thing. 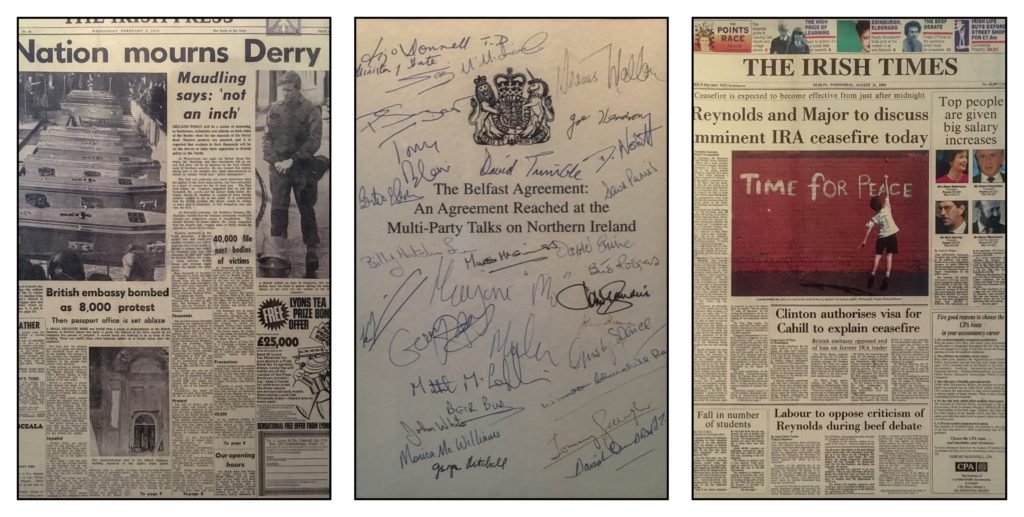 Those Westminster Parliamentarians who brush off the border issue by stating, “we can fix it with blockchain”, or pretend the border was never a problem, have never stood on it. It is just a tool for their ambition.

Springtime in Ulster:
Aerials in Hedges, squawk
of walkie-talkies.

And a school child’s poem, from the 1990’s, written in the shape of a helicopter:

Round and Round,
Up and Down,
Through the Streets of Belfast Town

The public school boys of Brexit did not live this experience.

So what brings these things together at OER19 for me?

Growing up as I did in the 1970’s against a backdrop of pub bombings, and being in the military in the 80’s gives you a perspective. These things were pre-internet. Twitter and Facebook were the school playground, pub, or bar, or mess. As a child and young man, with next to no education, the news papers were “reliable sources”.

Looking back I remember how the media would whip up a frenzy about the troubles, reports of terrorists and loyalists – atrocities on both sides but the language often different. People of my age will remember the dubbing over of Gerry Adams voice, and if you don’t then watch Derry Girls.

The propaganda machine was huge, and all bent toward the status quo. To maintain power. It was there, but inaccessible to many.

In thinking about the web as we know it, we realise that it has democratised propaganda. Everyone can lie and make it look plausible. Brexit will one day be a study in propaganda, elevated through the modern media.

This is what the pro-social / pro-societal web must push back against. This is how we must change the nature of the web, and our culture. For many when you talk about Open it becomes about digital. But here and now, I am mindful that Open is a mindset, Open is about borders and barriers, and context. And whenever we talk about Open, we must be mindful about Open for who and how and why?