“… in the context of talking about behaviour online, the notion of “anonymous trolls” comes up often enough, I think it’s worth interrogating, and also making visible the variety of non-toxic anonymous and pseudonymous presences that people cultivate on the web.” Donna Lanclos, 2015

Anonymity as come to the forefront of the debates around digital with the emergence of apps such as Yik Yak, Nearby and Whisper. 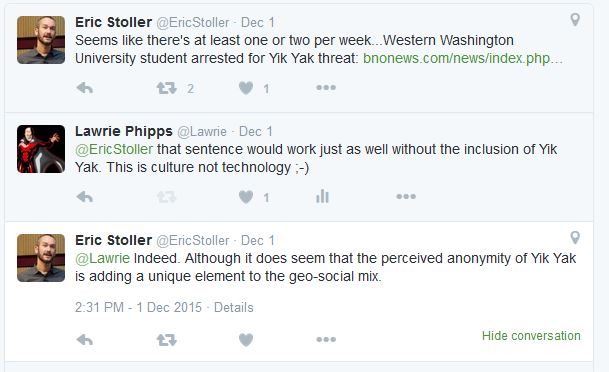 The story in the tweets above refer to the case of a Western Washington University student who was arrested in connection with a racist threat that was posted on Yik Yak and caused classes to be canceled. The student in question clearly thought that because his post was anonymous that he couldn’t be identified.

As Lanclos points out in her post, some people want anonymity for a specific negative reason:

“So they can Troll and Bully and generally be Unaccountable for their Bad Behaviour on the Web.”  Because:  the internet is made of people, and we can stipulate that some of them are indeed assholes.

I have been going through some of the Jisc Digital Literacy and Digital Capability resources and trying to identify some work that helps both students and staff understand the situations where online anonymity is a positive. Most of the work talks about the importance of understanding digital and developing a good online presence, and in the new Jisc Digital Capabilities work this is also emphasised.

Thinking about the issue of anonymity and pseudonymous presence, I am struck by how little we cover it with students, or indeed staff. Perhaps because we feel the need culturally to associate ourselves what we say and do? But there are times when anonymity is desirable and it is common to use it some educational situations, such as when testing whole class understanding using “clickers”.

I think we need to consider what skills with regards to understanding the limits and behaviours associated with anonymity and pseudonymous presence. For example:

There is something important about learners of all sorts being able to ask the “stupid questions” in places that don’t necessarily follow them for the rest of their lives.  Anonymity can provide those kinds of spaces.

With the Jisc Digital Capabilities Framework there is an underpinning element of identity and well being, what advice and guidance should it contain to promote the effective use of anonymity and pseudonymous presence.