Recently in discussion with Dave White about the Visitor – Resident Model we started thinking about what we mean by professional. In creating my own VR map (below) I started to realise that we have substituted the word professional to mean what we do for work. Whilst I work for Jisc, I also work for the LFHE, and I was using the map to locate them in the professional hemisphere. Those people who know me will know that I have many vices and hobbies – these include birdwatching, photography and spending a lot of time on canals. My technology is a big part of all three of those. As part of my passion for birds I spend a lot of time campaigning, and I am on the board of two charities. When I mapped this, I realised that I was locating them in the personal section. But this shorthand suggests it is not professional. On the contrary, I take my public persona on these issues very seriously. I feel the same way about my political views and also share those on online, always in a “professional” way. (In fairness Lanclos and White, when running workshops, often encounter individuals who express the need to use more than a single map to cover different aspects of lives.) 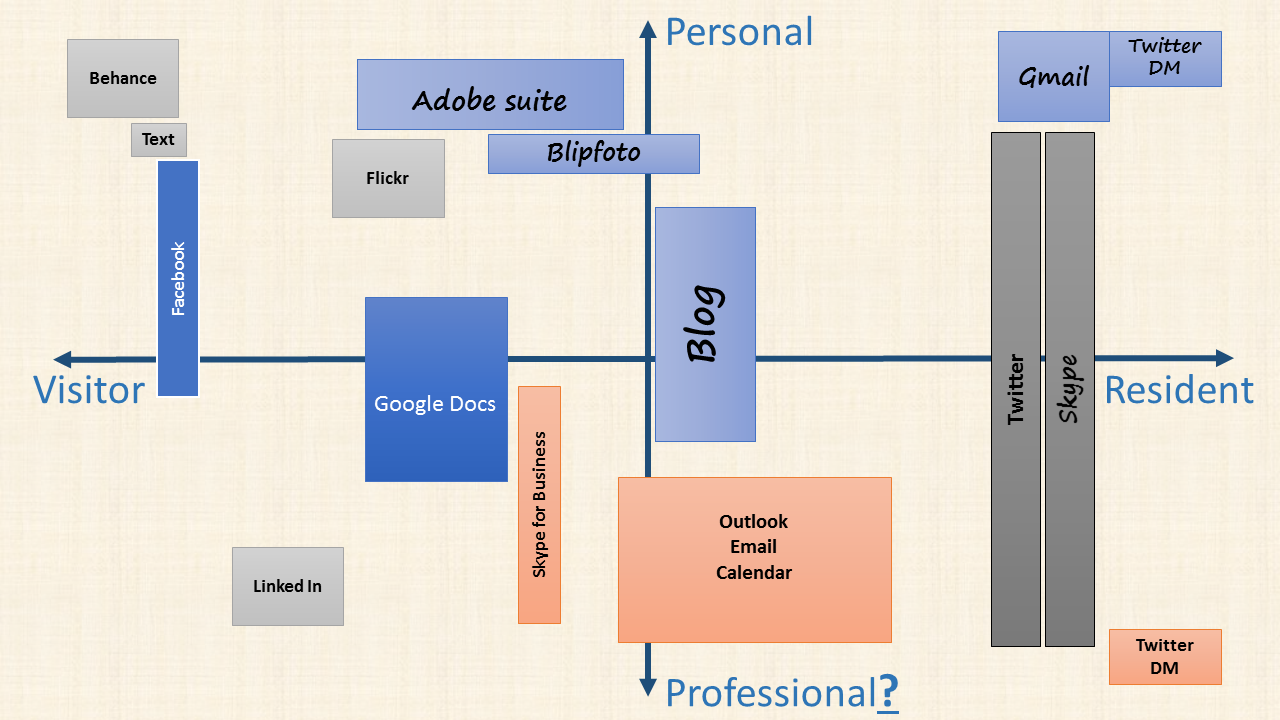 So what? Well for anyone who is visible in social media it will not come as a surprise when you say things, occasionally people will notice. Swearing, trolling, bullying behaviour online will be seen and often summarily dealt with by the community. Recently, someone approached me and asked “Does your office know you are trying to ban grouse shooting?” I was somewhat taken aback and didn’t know what to say. The person who said it was not of the same opinion of me, and saying it to me I think was a subtle attempt at intimidation. And it kind of worked. I reflected on what I tweet, blog and comment about in the public space. For a while I pondered starting a separate account for saying things, and only use my established mediums for work. But after looking back at my tweets and comments I realised that even though they were all on a personal level, they were always polite, reasoned and in my opinion professional.

I am looking forward to an upcoming article by Lanclos and White in Hybrid Pedagogy, that will cover authenticity and credibility. And they will certainly be touching on that when I run the digital leadership course. Thinking about my own practice when online there are times when some aspects of what I am saying must be completely alien to some of the people who follow me. Some of my colleagues have two personas or more, one personal, one “professional” or “other professional” where the word professional has become shorthand for “what I get paid for”.  But we as individuals, do not only do one thing or have a sole purpose. We have multiple dimensions that are influenced by and influences the many different aspects of our lives. An authentic human being will have multiple views, and vices. So when online it is OK have opinions, demonstrating that you may have other interests, skills and knowledge that do not relate to your “day job”, and this should do no harm to your online persona, it just shows that you are human, perhaps as opposed to a social media account that represents an organisation. And this is important because as humans we, usually, prefer to interact with other humans.

So what of the Hen Harrier in the title? If you work in education and follow me on Twitter then you probably noticed a huge surge in me tweeting about bird related stuff last weekend because I am an avid birdwatcher and amateur naturalist and I was at the British Bird Watching Fair promoting an organisation I set up with a couple of friends to help stop wildlife crime, and the Hen Harrier is probably the most persecuted bird of prey in the UK, having been illegally poisoned, trapped and shot to the edge of extinction. 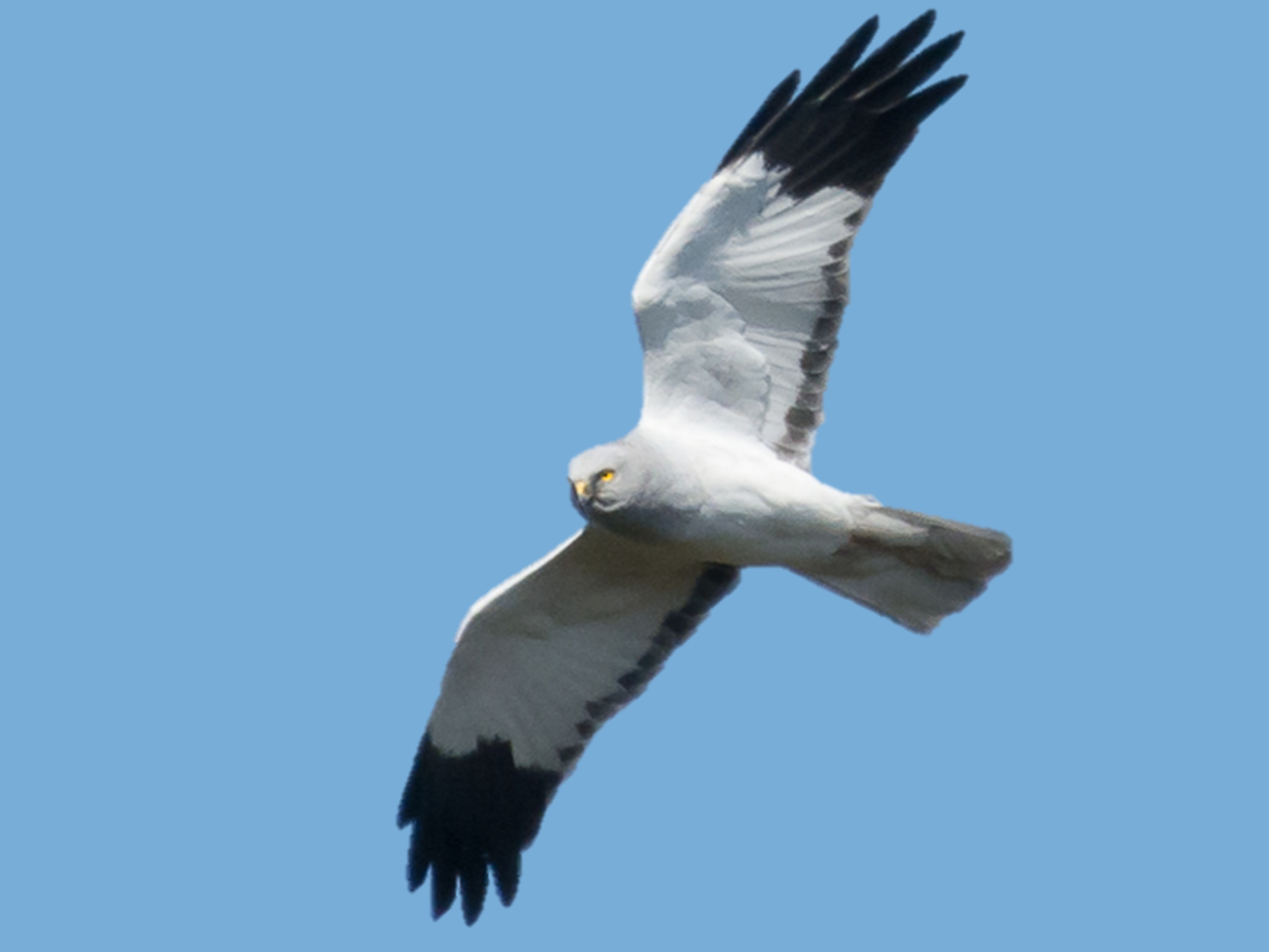 So as well as tweeting about education, technology, digital capability and digital leadership I also tweet about narrow boats, Wolverhampton Wanderers, other birds, and wildlife in general. Who I am in my personal life informs who am in my professional life, and that will be true for most people. This is often expressed in my work life by hearing colleagues tell me about what their kids are doing at school with the curriculum or technology. Personal informs “professional” and vice versa. Now, with social media, we get to choose how we express and how much we express about these facets of our lives. For me, I have chosen not to keep separate accounts, after all I am the same person whether I am running a workshop on digital leadership or a hiding under a bush photographing a rare bird or trying to identify a warbler.