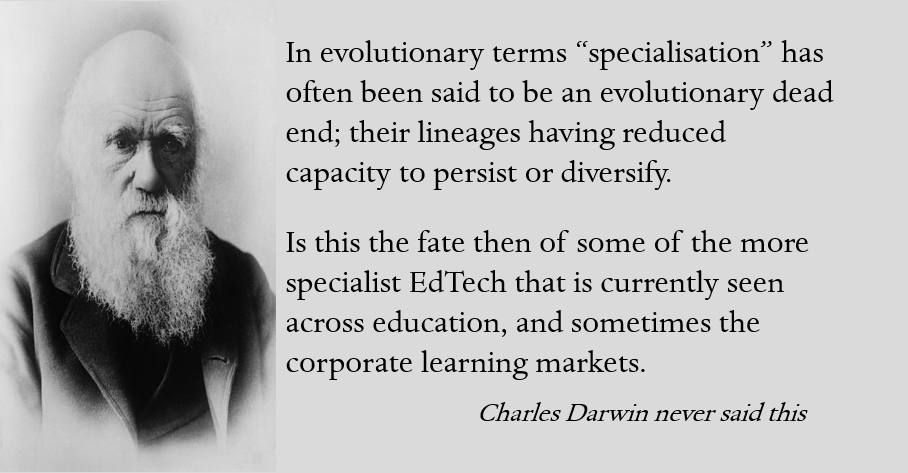 Back in 08 Myself, Cormier and Stiles asked a question about virtual learning environments (VLEs). Extinction or Evolution? Some might have seen the question as a tautology, certainly at the time of writing we anticipated that the VLE of 10 years later would have evolved and changed and look very different, but have the same lineage. In the end the VLE hasn’t changed that much, I might also argue it hasn’t adapted either. But most of the digital platforms we see in education have.

I am seeing a trend where Microsoft Teams is gaining a lot of traction. Several Universities and Colleges have started to migrate toward a Microsoft only (although it appears to be a Microsoft mostly) offering for their learning environment. What MS Teams has done successfully is made itself into a hub, and through its API, third party tools such as plagiarism detection, content streaming, e-submission etc, which can be used as stand alone tools are now accessed through Teams.

Because of this approach centering integration, I have witnessed discussion (Twitter, EdTech events, Forums) about whether Microsoft Teams is a replacement for the VLE or learning management system (LMS), and for a while I have been trying to think about that question and come up with an answer.  Itt turns out that it’s the wrong question.

Some VLEs have already built an integration into Teams, and some institutions have  recognised that the primary role of their existing VLE is a content repository so the implementation of that integration makes a lot of sense. (Of course leaving aside the very distinct possibility that someone will be taking their content out of one drive to move it to the VLE which will be accessed from teams –  one of those steps just might not be necessary!) But it is not a case of choosing between Teams or the VLE. What Teams highlights for me is the move toward more integrated thinking around digital, and this focus on integration has left us with something that, when we step back, could be used as a VLE. The way an empty building could be used as a school. For me I think of Teams as a digital ecosystem, or at least that seems to be the direction of travel. Where the VLE is bounded and constrained, Teams doesn’t have to be. Furthermore a lot of the configuration is in the hands of the user.

Let’s look briefly at why an institution might start using Teams as a learning platform with students. There are probably reasons, such as cost and support, technical and operational as to why the institution would like it. But one reason stands out to me; it is going to be part of the students’ skill set when they graduate. As we wrote back in 2008:

…it could be argued that, in the context of developing students who draw on a broad range of experiences, encouraging them to think more holistically about their education in the context of their own future development, the application of a bounded, modularised and time-limited system, such as many VLEs, is counterproductive to the skills they will need to develop to keep a portfolio to support learning in their future careers.

Or as we say later – no student graduates and is grateful that they know how to use <insert name of your VLE>. In addition, not only are they able to use the common tools of the workplace – all of their work will also be easily transferable and accessible to them.

So if the question is not “Teams or the VLE?” what is it?

Perhaps a more appropriate question then is “should we go down the Domain of One’s Own ecosystem route or the Enterprise ecosystem (Teams) route?”

What is Domain of One’s Own (or Domains as many refer to it)? Audrey Watters describes it eloquently:

the Domains initiative provides students and faculty [staff] with their own Web domain. It isn’t simply a blog or a bit of Web space and storage at the school’s dot-edu, but their own domain — the dot com (or dot net, etc) of the student’s choosing. The school facilitates the purchase of the domain; it helps with installation of WordPress and other open source software; it offers both technical and instructional support; and it hosts the site until graduation when domain ownership is transferred to the student.

And then — contrary to what happens at most schools, where a student’s work exists only inside a learning management system and cannot be accessed once the semester is over — the domain and all its content are the student’s to take with them. It is, after all, their education, their intellectual development, their work.

But even this framing I have been playing with, MS Teams vs Domains, is a false dichotomy. If we are to prepare students effectively then we need to recognise that they should be exposed to a blend of enterprise and Web-based tools. The amount may vary depending on the student but a well prepared graduate must be able to make choices about their digital workflows in their futures.

We should show progression in how we work digitally with students, not just showing them the utility of the tools available to them, but help them develop their approaches to digital, how they engage with the tools and how they engage with other humans through the medium of digital. Enterprise tools can build a student’s confidence and capability, and when they are ready we should further enable their own digital journey, giving them the capacity to experiment and explore other tools, for example through a Domains approach.

Dave Cormier talks about “education in a time of abundance”; we live in a time of abundance of information, of data, of potential connections. For education, for students, our digital platforms and ecosystems need to be more porous. We need to bring data and information in, and we need to get data and information out. Combining enterprise solutions, such as Teams, and web as platform approaches, such as Domain’s is a way of better preparing our students for working in a world dominated by digital.

For many years we have been striving to connect the VLE, e-portfolios, and other elements of EdTech, trying to “sell” a solution to a problem of our own making – “how can students access their information and data once they graduate?” I am starting to think that a combination of, for example, Teams and Domains might help us produce a graduate well-rounded and able to make sense of this digital world. And if we support them in how they gain knowledge about digital, support them in how they connect and communicate, we can also help them to realise a pro-social web.

As for many aspects of EdTech, I think it is worth thinking of them in a Darwinian mindset. In evolutionary terms “specialisation” has often been said to be an evolutionary dead end; their lineages having reduced capacity to persist or diversify. For some of the more specialist EdTech that is currently seen across education, and sometimes the corporate learning markets, one needs to consider if they are at that evolutionary dead end.

86 thoughts on “Thinking aloud: MS Teams, Domain of One’s Own and EdTech”